There’s a fascinating conversation happening in Britain right now on the rhetorical aspects of being overweight.  The BBC just published an article that debates the merits of calling patients “fat” or “obese,” with health professionals evaluating which one will help move patients toward a more healthy weight: 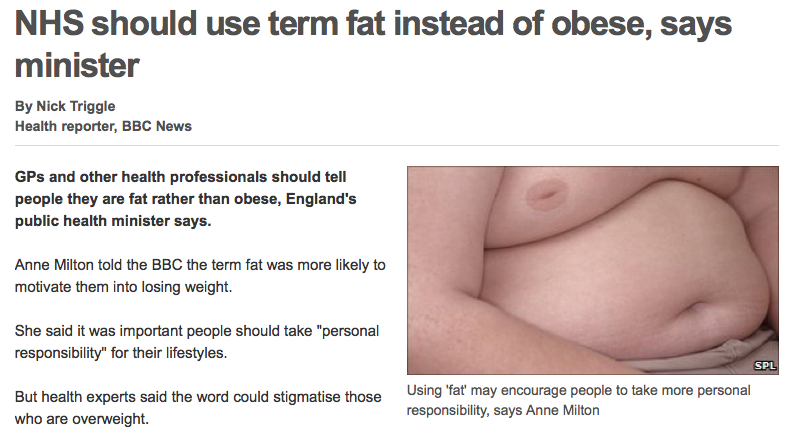 The debate appears to hinge on motivation, with some health professionals advocating for the term “fat” with the argument that it will ostensibly shame them into improved weight management.  The flipside, of course, is that the pejorative connotations could reinforce a negative self-image to the extent that is demotivates.

Professor Steve Field, of the Royal College of General Practitioners, makes an insightful remark about the rhetorical consequences of the term obese: “I think the term obese medicalises the state. It makes it a third person issue. I think we need to sometimes be more brutal and honest.”  Field’s comment can be applied more broadly, I think, to the host of conditions that are now in the process of “medicalization,” with “disorder” being attached to a wide-range of conditions that not too long ago were tagged with more colloquial descriptors–and perhaps should remain as such.  The DSM-IV is replete with new classifications like “personality disorder” and “caffeine intoxification disorder.”  This trend toward medicalization is largely a rhetorical process and thus signals the need for understanding it along those lines, I would argue.