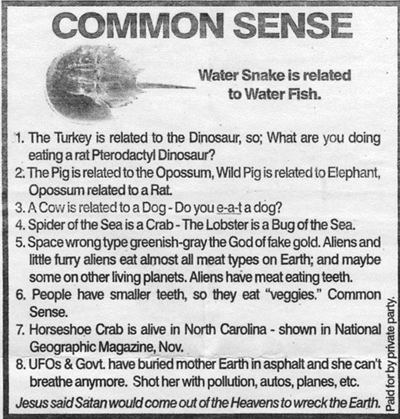 I present Common Sense from Chet Tiffany. Common sense-you know, sound judgment, prudence, or wisdom. Try reading it aloud because it’s fun and sort of flows poetically. And then think about “common sense” and how a lotta times it depends on audience and values to be common and/or sense. I like Chet, but his/her sense ain’t really common…to me. What I mean is I imagine Chet Tiffany is like me and suffered a lot with regards to “common sense.” What I mean is “common sense” is a big assumption that’s rarely common and not always the only sense.

My dad often asked me if I had “common sense” or would strongly suggest I use my “common sense.”  It got me worried about what he meant and I felt like I was under common-sense surveillance a lot. Before acting I would think, “is this common sense?” or “would this be common sense?” An audience of Dad meant I’d rarely get it right or be common sensical.

Anyway here are some examples of “common” and “uncommon” sense that are in no way like Chet’s. I don’t know how to imitate his artistry.