The Wall Street Journal just published an article about colleges and their rejection letters: “Rejection: Some Colleges Do It Better Than Others.” It’s a gives an interesting report on recent discussions on CollegeConfidential.com where college-bound students have shared details about the letters they received. 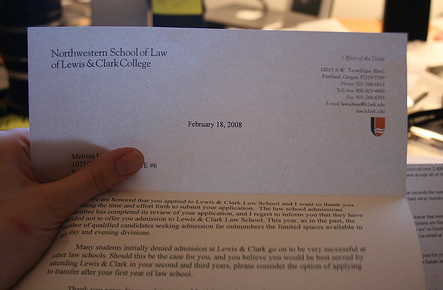 I was struck by one example. Admissions at Boston University tried (it would appear) to soften the blow by stating they “give special attention to applicants whose families have a tradition of study at Boston University.” But as one student responded, for someone who was attempting to follow his family tradition by attending the school such a comment wasn’t comforting at all. Quite the opposite in fact.

It’s always interesting when a message can be understood so differently from how the author(s) intended (yes, I know, I should stay away from the “intentionality” quagmire), and I do wonder if the letter writers were aware of how that line could be understood. But this example also reminded me of an opposite situation, one in which excessive celebration had others hang their heads down in shame. Okay, I’m exaggerating, but I do remember hearing a thank-you speech that had enough superlatives for those who had helped in the project to make others who hadn’t worked on the project fidget uncomfortably in their seats. Ouch.

But if you have a minute, you should check out a thread on CollegeConfidential.com where users are spoofing rejection letters. They made me smile 🙂

One thought on “The Art of Rejection”