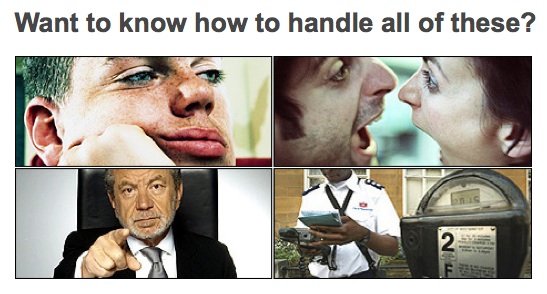 The BBC published an article this morning on rhetoric, even though they frame it as “speech-writing.”  It’s a super-quick primer on persuasive basics, which won’t reveal too much to the amateur rhetorician, but is intriguing nevertheless, if only to see how rhetoric gets represented.

I find it interesting that the article revolves mostly around the rhetorical situation of speeches, pulling examples almost exclusively from powerful politicians, but has pictures sprinkled throughout that nod to rhetoric’s everyday usefulness.  I’m not so sure that you’d want to perform a “speech” (in the way the genre demands) in these situations (parking meter attendant, finger-pointing boss, depressed friend, or screaming-match with the significant other).  Each rhetorical situation calls for different tactics and adaptation; a crucial first step in beginning to explore persuasion is knowing that rhetoric–the art, study, and practice of human communication–is contingent and conditional.

The article lists a few general techniques, however, that have proved effective over time:

It’s encouraging to see “break the rules” as the last section, though stated a little bluntly.  We might consider it as something like “genre-bending.”  Messing with the audience’s expectations is an excellent way to generate and maintain engagement and, at times, increase your credibility.  This is often done by bringing one genre format into a situation that doesn’t quite call for it.  Having been primed for certain communication patterns over time, we’re surprised when the pattern gets jostled.

Oh, and in the comments someone correctly identifies one of the examples given in the “Contrasts” section as antimetabole (a specific form of chiasmus . . . but you already knew that).