Here’s what you might find on the BBC newspage if you’re cruising around tonight:

It doesn’t give much insight into the rhetorical skill of Obama, offering up only the obvious, like pairing his intonations with sermonic delivery (here referred to as “churchy”). What irked me a bit was a missed opportunity by Ekaterina Haskins, the selected academic expert on rhetoric, to correct the popular (pejorative) understanding of rhetoric. Haskins, who is cited as being a professor at Iowa, but from what I can tell is a professor at Rensselaer Polytechnic (but received her doctorate from Iowa), is quoted as follows:

Rhetoric always has the connotations of being about appearances rather than reality but he doesn’t sound false. He plays with the patriotic abstractions that allow for a certain kind of rhetorical manoeuvring and fills them with specific concrete examples.

While there’s a chance that the BBC snagged a quote out of context, I was disappointed to see the Appearance/Reality binary that rhetoric is so frequently and so unfairly thrown under reinforced and left mostly unchallenged. It is implicitly suggested that rhetoric is more than the connotations that typically accompany it, but her quote actually uses them to prove her point. I’m not sure that “he doesn’t sound false” debunks the Style/Substance divide that rhetorical studies have attempted to overcome for sometime now.  I’ve read a few pieces of Haskins’s scholarship (she’s a classical rhetorician, focusing on Isocrates) and it’s very smart stuff, so I’m surprised by this missed opportunity.

One of the goals of Harlot is to engage the public with an understanding of rhetoric that transcends this limiting conception. While I don’t want to speak for the project, I teach rhetoric as epistemic.  In other words, rhetoric simultaneously describes, discovers, and creates knowledge.

Am I just ornery?  Perhaps I’m being crabby and should be appreciative of the fact it doesn’t outright slam rhetoric as being useless and deceitful?  This is the view that the Rhetoric Society of America has taken.  Here’s a recent email from them: 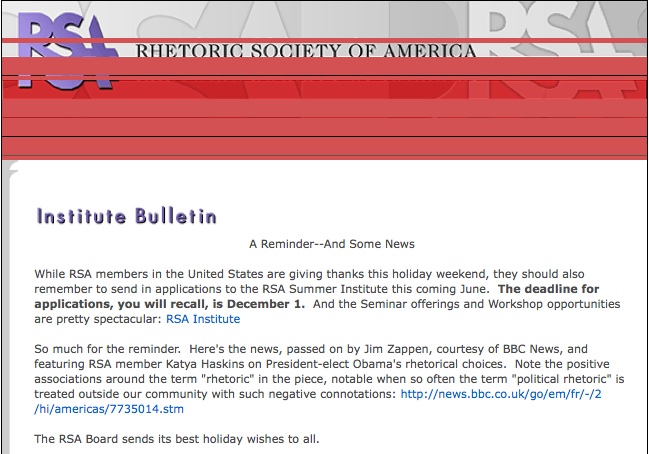 Harlot, as I see it, will continue to work to make rhetoric an integral part of every informed citizen’s life, going beyond an understanding of rhetoric as good or bad, to rhetoric as something indeliably necessary.