The website FlowingData has quite a bit in common with Harlot. Translating complex data of all varieties (money spent, reps at the gym, time you waste) into compelling graphic form, “Data visualization lets non-experts make sense of it all.”  At Harlot, our goal is to reveal all the various and subtle ways rhetoric penetrates our everyday through a language and location that invites everyone to explore and understand persuasion.  FlowingData, meet Harlot; Harlot, meet FlowingData.

The graphic that’s posted at the very bottom has captured my attention for a number of reasons, mostly related to Derrick Jensen (no direct relation–only in the larger Danish sense), who is perhaps my favorite author (and certainly the most sane person I have ever had the pleasure of meeting).  As a radical environmentalist, Jensen is constantly searching for new ways to communicate just how severe the situation is we are currently, collectively facing.  That’s at the macro level.  At the micro level, he’s challenged with taking statistical data that most logically reveals how the earth is being murdered and transforming it rhetorically into something that sticks.

Some data for you: 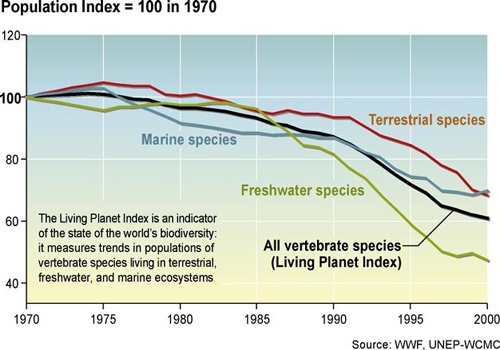 Facts, though, have a tendency to roll right off of us.  We’re more inclined to be persuaded by stories that connect with us personally, in ways that we can readily link to everyday experience.  Here’s a stellar example of the rhetorical task he encounters when trying to persuade people that our way of life, our sense of self, and relation to what allows us to live is not just unsustainable, it’s immoral and insane.*    And stupid.

“Within our current system, the life span of any particular artifact as waste is usually far longer than its life span as a useful tool.  Let’s say I go to a food court at a mall and eat a meal with a disposable fork.  Let’s say I use the fork for five minutes before one of those tines breaks (as always seems to happen) and I throw it out.  The fork goes in the garbage and is buried in the landfill.  Let’s say this particular type of plastic takes five thousand years to break down … For every minute I used the fork it spends a thousand years as waste: a ratio of one to 526 million, a number so large it’s hardly meaningful to human minds.  On a scale that’s easier to fathom, if we compressed a fork’s five thousand year existence to one year, the fork would have spent only six one-hundreths of a second as an object useful to me.”

Although he presents it rather modestly, Jensen’s shift from a ratio to a story-of-sorts is a crucial rhetorical move–one that all environmentalists and activists of all walks should take note of.  We need to keep pressing for the most effective forms for communicating the gravitas of the situation (but without falling prey to the idea that that’s all that needs to be done).

I think the artists of GOOD and Fogelson-Lubliner that collaborated to produce the brilliant illustration below have a solid grasp of what it takes to translate facts in a way that sticks.  I strongly suggest that you click the image to view it in its full glory . . . 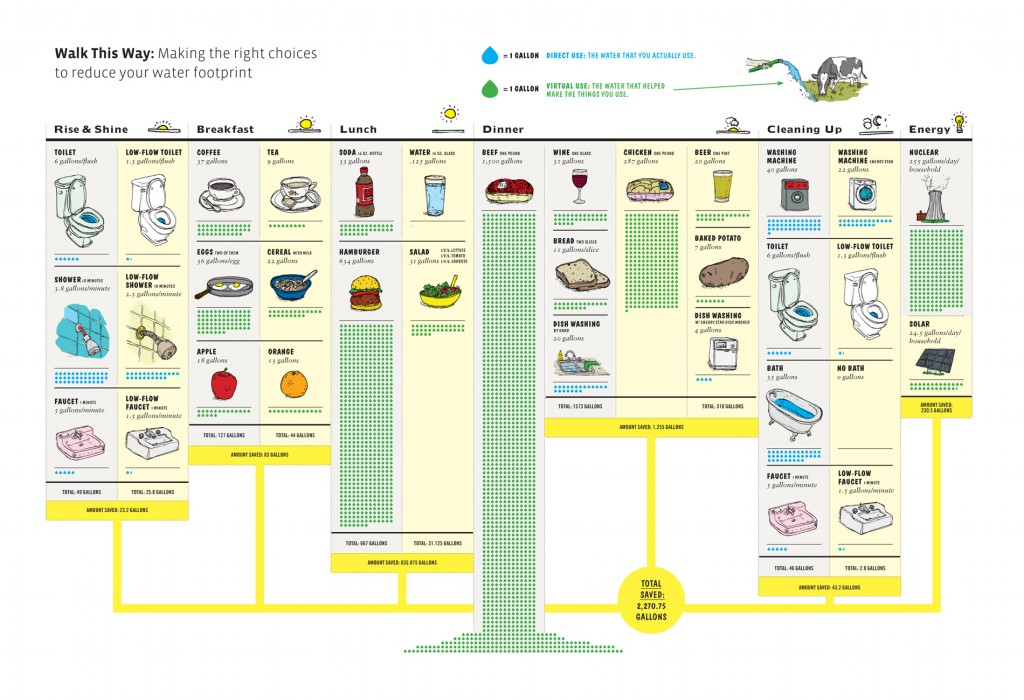 And when you’re done there, don’t forget to check out the archive of amazing at FlowingData.

* I use the term “insane” quite literally, in its strictest definition(s): senseless; an unsoundness of mind that affects one’s capacity for proper responsibility; one whose way of life and/or mental state is such that they are unable to make a sustained commitment to their own health and the relationships that constitute it.  Perhaps “madness” is more accurate, though, since there is a particular violence to our collective insanity.