So, I like ProfHacker. For realsies, it’s one of the few blogs where I read 75% of the posts (it used to be a lot more before they changed their rss feed to only preview the articles). Part of what I like about that blog is that they deal with what I’m going to call, right here, right now, without knowing if there is actually a term out there: counter-persuasion.

It’s like this: our things (supposedly, at least) are made to engage us, but when these things are too engaging we can suffer from the consequences of being distracted from the things we’re supposed to be accomplishing. When I avoid writing because I’m on facebook, it’s because, well, facebook is just so engaging. Or email. Or tv. Or whatever. So, ProfHacker posts such articles as “6 Ways to Avoid Letting Your Computer Distract You.” This article is specifically reporting on programs which aim to reduce or eliminate the technological things that lure you into using them: email, internet, social networking sites, etc. The distracting devices/services/sites cannot persuade you into interacting with them because of these programs which eliminate the distraction altogether. You know where I’m going with this. That’s right, say it with me now: counter-persuasion.

These programs are made specifically to counter act the persuasive temptations that exist with current technology. If you could see the image in my head when I think about this, it looks something like this: 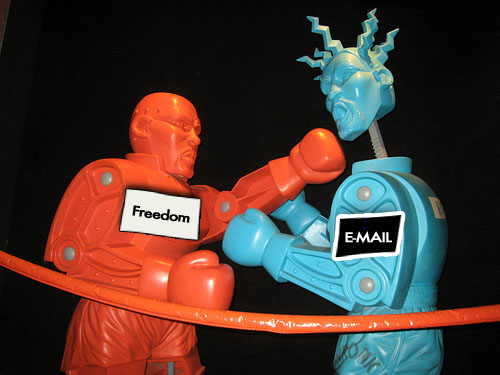 More or less, I like the cyclical idea here that the software itself is persuasive because it’s reducing the temptations and persuasiveness of other softwares; that the use of counter-persuasion is persuasive itself. It’s a bit convoluted, I grant you, but cool nonetheless.