NPR has officially won my “Rhetorician of the Week” award, for their new project: “Fighting Words.” Here’s how they describe it: 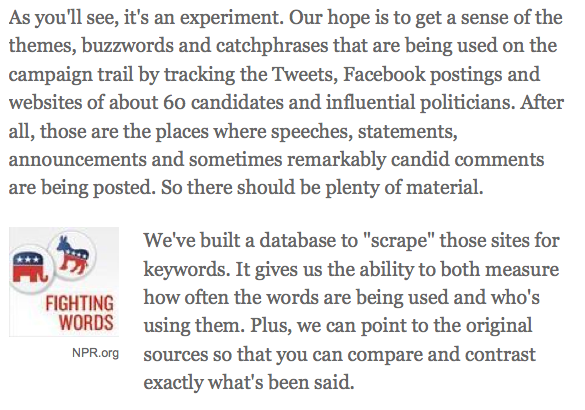 Check out this video for a sixty-second overview of the project:

NPR is doing great work here in helping cultivate civic rhetorical literacy, simply by providing the data needed for analysis.  The one critique that I believe is worth mentioning, however, is the title of the project: Fighting Words.  It seems they’ve fallen into that well-worn groove of envisioning argument and debate only in terms of WAR.

Lakoff and Johnson’s Metaphors We Live By reveals just how deeply this association has ingrained itself into our everyday expressions and thought patterns; here are just a few examples they list:

Your claims are indefensible.

He attacked every weak point in my argument.

His criticisms were right on target.

I demolished his argument.

I’ve never won an argument with him.

He shot down all of my arguments.

The language we use to frame the practice and process of debate significantly impacts how think about and respond to it.  NPR is taking the same route that the lame-stream media takes in trying to boost their ratings: amplify the sense of contentiousness to get viewers to tune in.

Every time I hear these metaphoric frames of aggression and war invoked without a thought given to their long-term consequences, I think of all the different ways we might envision argument.  As Lakoff and Johnson so eloquently put it:

Imagine a culture where an argument is viewed as a dance, the participants are seen as performers, and the goal is to perform in a balanced and aesthetically pleasing way. In such a culture, people would view arguments differently, experience them differently, carry them out differently, and talk about them differently.