I’m always a big fan of preachers’ performances in the middle of campus. Today as I was crankily grumbling my way to work, I heard this gem, amidst a stream of other general and specific attacks on the surrounding students. The “you” who is apparently not a good person was seemingly the entire population of the Oval… and also, one can only assume, the target audience at which this man was preaching god’s love. Had he not been yelling imprecations at a young man who valiantly suggested, “Judge not lest you be judged,” I might finally have had to ask: What are you trying to accomplish here? I’m genuinely curious.

But instead, I kept walking while he continued: “There are no good people!” It was awesome. Really brightened my day. 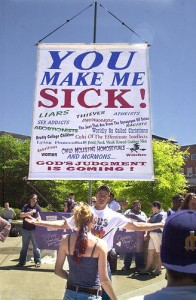 "You make me sick" by Erik R. Bishoff, Flickr

I just heard about this project, iParticipate, in which The Entertainment Industry Foundation (some kind of celebrity charity group with all kinds of causes) is promoting volunteering and public service via sitcoms:

This multi-year campaign, called “iParticipate,” hopes to make service a part of who we are as Americans and show what we can achieve when we all pull together.As a centerpiece for this initiative, EIF has enlisted major broadcast networks including, ABC, CBS, FOX and NBC, for an unprecedented, week-long television event beginning Monday, October 19. Tune in to seven days and nights of television and watch how your favorite TV shows and personalities shine a light on the power of community service.

I’d love to see this, and am pretty pissed that I never got that digital converter thing before I canceled the cable this summer. I’d just love to see how they pitch it — and how/whether audiences are going to be invited not just to passively sit and watch other characters volunteer (between commercials), but get off the couch and do so themselves. At least the video pitch seems to be keeping the stakes low: “anything, something, whatever… can change the world.” It’s silly, but I have to admire the effort and wonder at the faith in audience responsivity to such ploys. (Not to be cynical; I’m sure they’re very well-meaning… and the networks are getting some nice promotion along with the ego/ethos-boost.)

These promos and public service announcements seem to fit nicely in conversation with Jessie Blackburn’s smart new piece in Issue 3: “The Irony of YouTube: Politicking Cool”… and remind me why I keep pushing my students to look at how authors construct their audiences, the assumptions made about the appeals that will be most effective to certain demographics. (I have a feeling someones should be offended…) I guess for the sake of volunteer organizations around the country, we can only hope they’re right…. but I’m ambivalent at best.

Has anyone seen these episodes? Rhetorical hi-jinks to report?

Issue 3 is up and at ’em! We’re quite proud of the variety of articles we have this go round and are confident that you’ll find something that gets you salivating, so wander on over and take a look. Even more so, why don’t you let the authors know what you think by leaving them a comment.

And if you’re curious, here’s what’s inside:

Editors’ Letter for Issue 3
“From ‘Thank You for Your Support'” by Brian Hauser
“Why The Duke Lacrosse Scandal Mattered–Three Perspectives” by Heather Branstetter
“Harlot Of The Hearts” by Kaitlin Dyer
The Irony Of YouTube: Politicking Cool” by Jessie Blackburn
Interview with Frank Donoghue on The Last Professors

While you’re at it, take a gander at our call for Issue 4 (themed Rhetoric at Work) and get cracking on your submission.