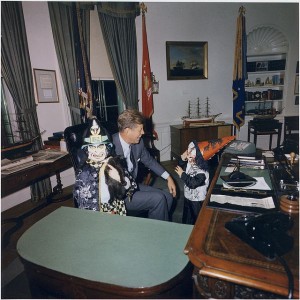 Happy Halloween. Hope everyone out east is safe and sound on solid ground. After gorging myself on Frankenstorm footage for three days, I’ve decided meteorologist Jim Cantore should run for president. He’s got the face for it. Plus, we’d know we’re in for a national crisis when he breaks out his dry suit. You wanna talk ethos? The Weather Channel may be the media’s last bastion of good will, practical wisdom, and virtue. Maps with colors other than red and blue. Storms with no patience for polls. Justified hype. And no faux holograms.

Since there’s no rain delay in politics, it’ll be a hoot watching the campaigns tiptoe to Tuesday’s finish line. But today’s for trick-or-treating, so here are some election-flavored reads for your sweet (sour?) tooth.

Slate looks at one party’s advantage in microtargeting the ever-elusive persuadables.

For data-viz enthusiasts, xkcd draws an illustrated history of partisan and ideological trends in the U.S. Congress.

Four debates, not a single question. Behind the haunting silence.

Last time I argued that Fox News’ ethos was damaged following the Democratic National Convention for criticizing President Obama’s never using the word “God” in his keynote address, and therefore not appealing to Christian voters, even though he quoted a passage from the Bible. But Fox News isn’t running for President of the United States, and this race may therefore not be affected by faith-related credibility issues discussed by news networks. President Obama, however, may have taken a credibly hit during the convention where dozens spoke on stage in support of his campaign. One such supporter was Massachusetts Senator John Kerry, who was widely critiqued (and justifiably so, it would seem) for being a “flip-flopper” on important issues during his 2004 presidential campaign. 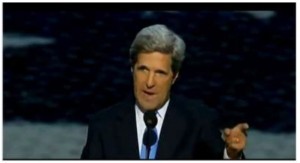 But will diminished credibility have an impact on the election at large? It’s hard to say.

In 2008 I found Senator Clinton’s support of then-Senator Obama odd, though I wasn’t surprised by it. Judging by Obama’s landslide victory, Clinton’s credibility was not harmed by several debates worth of disagreement with the candidate. In general Clinton certainly agreed with Obama’s platform much more so than McCain’s. As such, the two-party system engenders a stance that requires individuals to vote for the candidate they disagree with less, not necessarily the one they agree with the most.

So what is the role of ethos in a nation-wide election? Does credibility really matter as long as the candidate eventually says or does “the right thing” in the eyes of the voting public? It didn’t harm President Obama when Hillary Clinton supported him even after months of strong, public disagreement on key issues. In a country where a significant portion of voters care whether or not a candidate goes to church, will claims by conservative media outlets that President Obama doesn’t support Christian ideals harm Governor Romney’s campaign if it comes to light that these criticisms are unfounded? Will having an accused “flip-flopper” deride Governor Romney of changing his platform damage President Obama’s re-election campaign? I don’t think so. And rhetoricians who put stock in ethos may just find this troubling.

Boston Globe. Anti-Mormon bias facing Mitt Romney is as strong as what his father faced in1967, poll shows. June 21, 2012. Retrieved from: http://www.boston.com/politicalintelligence/2012/06/21/anti-mormon-bias-facing-mittromney-strong-what-his-father-faced-pollshows/L5j6dCabnhjQvarTu4WOCK/story.html

Criticism of Obama in this regard is also interesting given Republican candidate Mitt Romney’s Mormon faith. In an interview with David Gregory that aired on Meet the Press on September 9th, Romney describes his faith as “Judeo Christian” (Meet the Press, 2012). 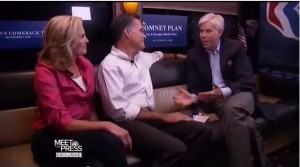 Figure 2: David Gregory’s interview with the Romneys on Meet the Press.

In the same interview Gregory describes Romney as “private” about his faith, and there almost seems to be an unspoken rule in the campaign not to talk about the fact that he is a part of the Mormon Church despite ample references to his church and its community. From the Obama perspective Romney’s faith is likely a non-issue. President Obama, for example, is certainly in favor of freedom of religion. Interestingly, though, some non-Mormon Christian conservatives, which one could argue there are certainly many of, have expressed concern over Romney’s faith. Southern Baptist pastor Robert Jeffress famously called the Mormon Church a cult, though he now endorses Romney (The Huffington Post, 2012). (You can see Jeffress’ comments here:  http://www.youtube.com/watch?v=7aF2Cnhr5jQ) However, according to one poll, “only 57 percent of Americans even know that Romney is a Mormon” (Boston Globe, 2012). But given Romney’s regular references to “church” and “God” it is curious that Fox News criticizes Obama for a lack of such language given significant differences many see between the God of many conservative Christians and the God of the Mormon faith. In short, one could argue that President Obama’s rhetorical approach aligns better with the conservative Christian base than Mitt Romney’s. Yet, Obama is criticized by Fox News for not appealing to Christian voters. For me such duplicity damages Fox News’ ethos.

Boston Globe. Anti-Mormon bias facing Mitt Romney is as strong as what his father faced in 1967, poll shows. June 21, 2012. Retrieved from: http://www.boston.com/politicalintelligence/2012/06/21/anti-mormon-bias-facing-mittromney-strong-what-his-father-faced-poll-shows/L5j6dCabnhjQvarTu4WOCK/story.html

I remember watching Hillary Clinton and Barack Obama debate several times in 2008. To me that was the election. At the time much of the country was so displeased with President Bush that it seemed impossible for a Republican to get elected. Indeed, President Obama ended up defeating Senator John McCain with 365 electoral votes, nearly one hundred more than the 270 needed to win (The New York Times, 2008). 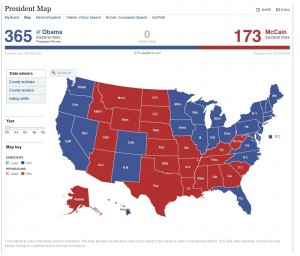 But more than having a good idea that the winner of the Democratic primary would go on to be the nation’s next president, the debates themselves were educational and downright entertaining. For several weeks two passionate candidates who agreed on much sparred on topics they disagreed on with great enthusiasm (and at times, even exasperation). Despite these disagreements, though, Senator Clinton, as expected, jumped to support Senator Obama once he earned the party’s nomination. She gave this support despite their, apparently many, disagreements. Did Americans take Clinton’s support of her former adversary seriously? For the most part, they did. But shouldn’t Clinton’s ethos be damaged by such a turn?

Following President Obama’s keynote address at the 2012 Democratic National Convention, Fox News anchors made the comment that the Democratic Platform never mentions “God.” (See Jon Stewart’s take for a useful mashup of relevant clips) However in his DNC keynote address President Obama uses the word “scripture,” and even quotes a passage from the book of Jeremiah when he says “There is hope in your future” (ABS News, 2012). Criticism of Obama’s lack of God references is essentially an observation that he fails to position the United States as a Christian nation. But even phrases like “In God we trust” and “One nation under God” can refer to deities in multiple religions. Meanwhile, quoting a passage from the Bible is squarely Christian and, one could argue, establishing that particular faith as normative. So why did Fox News deride the President for not mentioning “God”? Shouldn’t such a glaring mistruth damage the network’s credibility among viewers?