Before I condemn the BBC for severe lack of tact, I thought it best to run it past you all first to see if I’m way off base.  Check out the picture chosen to accompany an article on the US military changing it policy on “don’t ask don’t tell.” 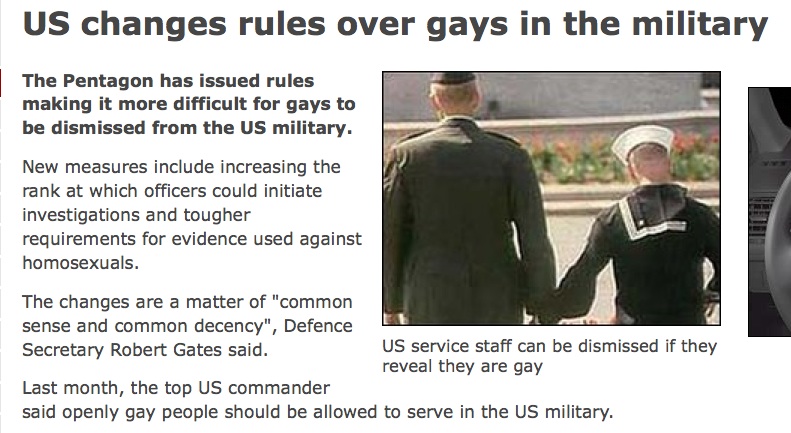 Are we being lead to believe that these two military men are holding hands? My guess is that their arms simply appear aligned from the perspective of camera; cropping out the hands at the bottom helps cement this view.

So why this picture?  Why are we being lead to associate this policy change with open-hand holding amongst military personnel?  How does this picture help frame the article’s message and how we interpret the policy itself?

Right now I’m more than a bit disgusted with such a maneuver, which seems beneath such a respectable organization like the BBC.  This is something we might expect from FOX, but c’mon–the BBC?!

Since I brought up one academic’s view on the state of the educational system last week, it’s certainly worth sharing the view of an outspoken non-academic–Dan Brown and his “Open Letter to Educators“:

What I find particularly exciting, is that Dan’s confrontation and engagement with the problems in institutional education has caused him to change his own actions. He plans to continue engaging in other important conversations after seeing the kinds of interaction and dialogue that can come from contemplating these important topics:

I think that is stellar cool.

Now, of course, some people would disagree with Dan’s thoughts/opinion. This guy, for instance:

Personally, I think they both do raise thought-provoking points, but I have to side with Dan on this one. Maybe it’s the other guy’s snarkiness and continual attack against Dan as a college dropout (which, I think, does not give him much credibility in understanding the amount of people who aren’t college educated), but, to me, arguing that “this is the way things have always been done, so we’re gonna keep doing it” is not a valid counter-argument. I fail to see what is wrong with creating an environment where students are engaged. Yes, each student is responsible for their own education and they should actively involve themselves in class discussions, exercises, etc. for their own benefit. I truly do believe that, but, as anyone who has spent time in a classroom environment knows, environments where students are engaged leads to better discussions. It’s leads to a better learning environment. And, for educators, shouldn’t that be the point?

I’m not trying to discount research. Of course, research is important and beneficial to our society, but it’s only one facet of the educational system. That’s why some fields delineate between researchers and those who practice that research. But, if we’re talking about “educators,” then they should be invested in and concerned with educat-ing. To me, that means also being open to better ways of doing just that.

via The Clever Sheep

David Wiley of Brigham Young University gave a talk at TEDxNYED which discussed “Open Education and the Future.” The slides themselves are below, but I think it would benefit you more by reading Wiley’s post of this presentation at his site.

What, of course, peaks this little harlot’s interest is Wiley’s concluding comments where he says:

Education has to some degree lost its way; forgotten its identity. We’ve allowed ourselves and our institutions to be led away from our core value of openness – away from generosity, sharing, and giving, and toward selfishness, concealment, and withholding. To the degree that we have deserted openness, learning has suffered.

You see where I’m headed with this, right? While Wiley’s comments are more strictly geared toward the eduction system and the students within it, I think this can easily be expanded to include everyone. And if it does include everyone, then Harlot is a response to that. Maybe other people are also catching on to our own concerns. Maybe we all want to be a little more accessible and open. People are changing and maybe Harlot’s one example of how we’re changing with it?

(And, yes, for the record, it was difficult for me not to make a Mega Man/ Dr. Wiley reference.)

I find this dog food commercial by Pedigree strangely alluring.

I can’t seem to look away from it. Apparently, I’m a sucker for cute dogs jumping in slow motion after a tasty treat. Does it make me so engaged that I need to run out and get Pedigree dog food? No, not really, but it does keep my attention longer than some Super Bowl ads, so it gets a thumb up for creativity.

Rhetorica shared this very cool video from The Economist about the iPad, which I absolutely had to pass along. The central question here? How will an instrument made specifically to consume media do in a society that is used to interacting with media. Check it out. . .

Jay Rosen on media after the iPad