My mother was highly offended by this.

A few days ago, at the Target check-out line, I quickly pulled out my trusty re-usable shopping bag to prevent the default plastic bag extravaganza. I’m used to having to force this unfamiliar object on check-out clerks, whose years of training have led to automatic waste. I’m certainly no paragon of environmental virtue, but I try to adopt reasonable measures to cut my own engrained throughtlessness. Anyway, this time I was delighted to hear the woman working the register say, “Oh good… we’re all trying to remember now, right?” And I thought, “Are we?! Fantastic!”

This was one of the best “we” identifications I’ve experienced lately, and brought home some of the subtle (and admittedly belated) evidence I’ve started to see of a nascent populist environmental conscience in which “we” are reasonable and responsible, economically savvy, even patriotic in attempts to revise assumptions that a central American value is the right to waste. But more importantly, we’re having the conversations.

Apparently this “we” is still a collection of individuals, however, rather than a collective drive that would include the astonishing waste that continues at higher levels, from the nonsensical plastic-bagging of backpacks checking on planes to the electric mayhem of Times-Squarish neon advertising that illuminates deserted downtown Columbus. Today I saw the the local gas station has installed TVs on every pump, as if we all need to waste electricity for the minute we’re (wastefully) pumping gas… including, again, when there’s no audience. But I digress from my morning optimism.

The morning was made even brighter by this article in today’s NYT about Michelle Obama’s new vegetable garden on the White House lawn:

“My hope,” the first lady said in an interview in her East Wing office, “is that through children, they will begin to educate their families and that will, in turn, begin to educate our communities.” 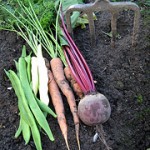 All this positive energy, in the midst of national anger and despair over where waste (of cultural, political, environmental “capital”) has led the country, has renewed a rhetorical vigor that I haven’t experienced since my younger days, when I handed my mink-wearing aunt a Peta “Fur is Dead” coffee mug, conscientiously objected to disection, and dreamed of saving the whales with Greenpeace. At some point, I stopped “preaching” and pushing my ideas on others, assuming that a non-judgmental modeling would be more effective than overt pressure, that composting, biking, and reasonably restricting my use of chemicals was a personal choice.

These days, though, I find myself thinking more about the simple and obvious lessons we could all be sharing just by talking about these choices, by enjoying the kind of productive dialogue that, at its best, rhetoric can be and promote.

I’ll admit to liking TLC. In most circumstances, I have no problem saying that I like programs such as Jon & Kate Plus 8, but I have been a bit disturbed by their schedule lately. You can take a look for yourself at TLC’s TV schedule by both the daily and weekly listing.

I suppose that it’s entirely possible that I never paid attention before, but it seems like that station has been overrun by what we might call the exotic. That is, almost every show on that schedule seems to have some fascination with situations that are out of the norm. Seriously, these day it’s all Little People, Big World, 17 18 kids and counting, LA Ink, Miami Ink, Table for 12, and Toddlers and Tiaras.

I’m concerned. That’s all. If we look at everything expecting it to be exotic, then does the mundane lose power? I’ve always been a strong believer in making the mundane seem as wondrous as it really can be. One of my favorite videos of late is that of Louis CK on Conan. . .

And I guess this is my point and my concern. If all we seem to want to see are the absolute extraordinary rarities that happen in life or the attempt at rarity, then aren’t we missing out on some of the actually extraordinary every day things?

Nothing I like more than a little analysis in a hard candy coating and, well, I feel like sharing.

Is He Bona Fide?

Is He Bona Fide? from Daniel Anderson on Vimeo.

“This video essay explores the theme of sincerity in the film O Brother, Where Art Thou?. The essay is composed in video form, using clips from the film as quotations and layering analysis over the clips through narration.”

“My second mashup for the
Total Recut Video Remix Challenge 2008
“What is Remix Culture?”

Here’s a list of all the entries in the competition:
http://www.totalrecut.com/contest-videos.php”

“Here we go kids, after hours of writing, editing, shooting, cutting, and recutting my review… err… video essay for “Watchmen” is complete.

I’m going to work on creating a more concise version thats more along the lines of an actual review, but this should whet your appetite.

(and yes, I’m reading from a teleprompter. you try doing a 20 minute review from memory and smoothly…)”

This is more of a lecture, but still mighty thought provoking. I especially like starting at the 29:30 minute mark when Thomas Friedman says that being able to use “imaginative thinking” and connecting dots, in the way liberal arts does, is essential. Then again, I’m a bit biased.

Bringing liberal arts into the equation is more important than ever, because we’re in a world now where imagination and mashups–the ability to mash things together through really imaginative, I think, thinking–is going to be such a huge advantage. . . I think inspiration, innovation comes from having two or more specialties and applying the framework of one specialty to the framework of another. And so, it is great, it is critical, it is essential. We have people who are experts at dots, but we also need, as individuals and collectives, to be encouraging the connecting of those dots and the mashing of them together.

My, my. Nothing like economic turmoil to wreak havoc on what a society thought it knew.

A Times article, “Can Marijuana Help Rescue California’s Economy” by Alison Statemen, reports that California is revisiting its strict rules on medicinal marijuana to consider whether the cash crop could help straighten out a bad economic situation. Apparently there’s enough money in the economy — it’s just a matter of what people are (not) spending it on.

According to Statemen, marijuana is California’s “biggest cash crop, responsible for $14 billion in annual sales, dwarfing the state’s second largest agricultural commodity — milk and cream — which brings in $7.3 billion annually.” Further, she writes, “[c]urrently, $200 million in medical marijuana sales are subject to sales tax. If passed, the Marijuana Control, Regulation and Education Act (AB 390) would give California control of pot in a manner similar to alcohol, while prohibiting its purchase to citizens under age 21.”

Another reason lawmakers are reevaluating legalizing marijuana is that it would result in the decrease of arrests, prosecution, and imprisonment, saving the state as much as $1 billion a year, Statement writes.

And, finally, adopting the law could make California “a model for other states” because as “[Democratic State Assembly member] Ammiano put it: ‘How California goes, the country goes.'” (Hmm. Perhaps this observation explains why the nation is so confused about gay marriage as well.)

I’m really quite surprised, but I don’t know that I should be. Quite a bit would change and for the same reasons that some things have not. Smoking bans won’t result in a move toward outlawing cigarettes any time soon because the government makes a killing on taxing the item. Further, I’m sure a lot has been learned from the U.S era of alcohol prohibition. The country decided that profiting off alcohol consumption was better — economically — for the country than policing it’s illegal trafficking. If history repeats itself here, gone would be a black market and in would come flood of income in proper capitalist fashion.

In a rhetorical sense, one of the most interesting results would be a partial collapse of the War on Drugs. It could change quite a bit of what the nation stands for and how it continues to portray its surpriority in global terms. I don’t want to run too far ahead with this idea, but the change could be huge. In a time when the country has just finished a two-term presidency that resulted in a substantial rise in unfavorable feelings toward the country, I wonder how the doxa of the nation and the globe would change as a result of a change like this one.

Difficult times can change just about anything, it seems. Let’s wait and see what happens.

I’ve never believed in trickle-down economics. People are people and people are greedy. More times than not people are going to look out for themselves rather than anybody else, so they’re going to hang onto as much money as they can.  Plus, if history tells you anything, it just doesn’t seem to work.

So, when Jon mentions his idea of trickle up economics, I’m tempted to believe that it would actually work. That people would take money and pay back their loans, which goes back into the banks. I mean, if we’re going to give the financial industry money, it might as well pay off some of our debt too.

But, people are still people and people are still greedy. Even when they’re the less wealthy people. Hopefully, debt would get paid off, but what happens after that? Do they take anything of monetary value and stuff into a mattress? The best thing for the economy would be to buy things, right? I for one have never been much of a shopper. Granted, I might buy quite a few CDs, but beyond that I’ve always been the “save your money for a rainy day” sort.

It does make me wonder, though. With the current way that we do things ending up in such a dissarray, maybe we should try something new. Who knows, it could work.