We are delighted to announce another new contributor to the Harlot blog: Heather Lee Branstetter, whose “Why the Duke Lacrosee Scandal Mattered–Three Perspecitives” demonstrates an all-too-rare kind of rhetorical listening, has also come on board. Born and raised in a rural mining town out West, Heather has a libertarian streak, doesn’t care much for social norms and, luckily, enjoys the taste of her own feet. Enjoy!

We hope you’re having fun with Issue 4 — drop us a line or comment and let us know what’s working (or not) for you. And we’re already looking forward to your submissions for the fall issue… 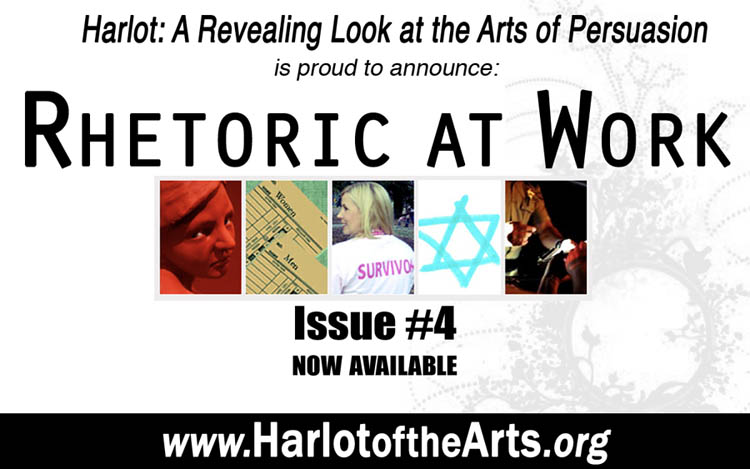 Rhetoric-centric journals are popping up all over the web these days.  Take note of the newcomers:

The Journal of Undergraduate Multimedia Projects (JUMP) “is an electronic journal dedicated to 1) providing an outlet for the excellent and exceedingly rhetorical digital/multimedia projects occurring in undergraduate courses around the globe, and 2) providing a pedagogical resource for teachers working with (or wanting to work with) ‘new media.’  The journal is designed to be not only a repository for quality multimedia scholarship—bringing together some of the most rhetorically creative and rhetorically impactful works produced/composed by our undergraduates—but also, unlike its digital brethren (i.e., mega repositories like YouTube), it seeks to also offer a critical perspective” (from “about The Jump“).

Present Tense: A Journal of Rhetoric in Society “is a peer-reviewed, blind-refereed, online journal dedicated to exploring contemporary social, cultural, political and economic issues through a rhetorical lens. In addition to examining these subjects as found in written, oral and visual texts, we wish to provide a forum for calls to action in academia, education and national policy.  Seeking to address current or presently unfolding issues, we publish short articles of no more than 2,000 words, the length of a conference paper” (from “about Present Tense“).

Check out their CFP here.

Relevant Rhetoric: A New Journal of Rhetorical Studies “is a refereed online journal created to publish pieces of academic rhetorical criticism that are of value not only to academic scholars and historians interested in persuasion, but also to the educated lay-public. The journal seeks to further our understanding of and conversation about modern persuasive practices with the largest possible audience” (from their “about” page).  “The emphasis of Relevant Rhetoric: A New Journal of Rhetorical Studies is on the context of discovery rather than the context of justification. This means that the writing and editorial conventions practiced by most academic journals is modified so that the focus of each article is on the author’s findings, conclusions, interpretations, or suggestions, rather than previous literature and research methods” (from their submissions page).

Our choice of words helps facilitate certain thoughts and empowers particular logics, while disciplining others.  This is a foundational principle of rhetorical studies and probably nothing new to many of this blog’s readers.

Every once and awhile, though, I realize just how high the stakes really are.

The video below was found at WikiLeaks, “a website that publishes anonymous submissions and leaks of sensitive governmental, corporate, organizational, or religious documents, while attempting to preserve the anonymity and untraceability of its contributors. Within one year of its December 2006 launch, its database had grown to more than 1.2 million documents” (wikipedia entry).  It is a classified US military video that shows the shooting of a dozen people in a suburb of Baghdad.  Among the victims were two Reuters news staff.  Two children are also involved.

Please take caution: this is raw footage, complete with the Army’s audio, of people being shot.

I deliberated on alternatives for “being shot” for quite some time.  Perhaps–“this is raw footage of people being murdered.” Or “slayed.”  Or “wrongly identified and accidentally fired upon.”

In the video you hear the military personnel saying, “We just engaged all eight individuals.” 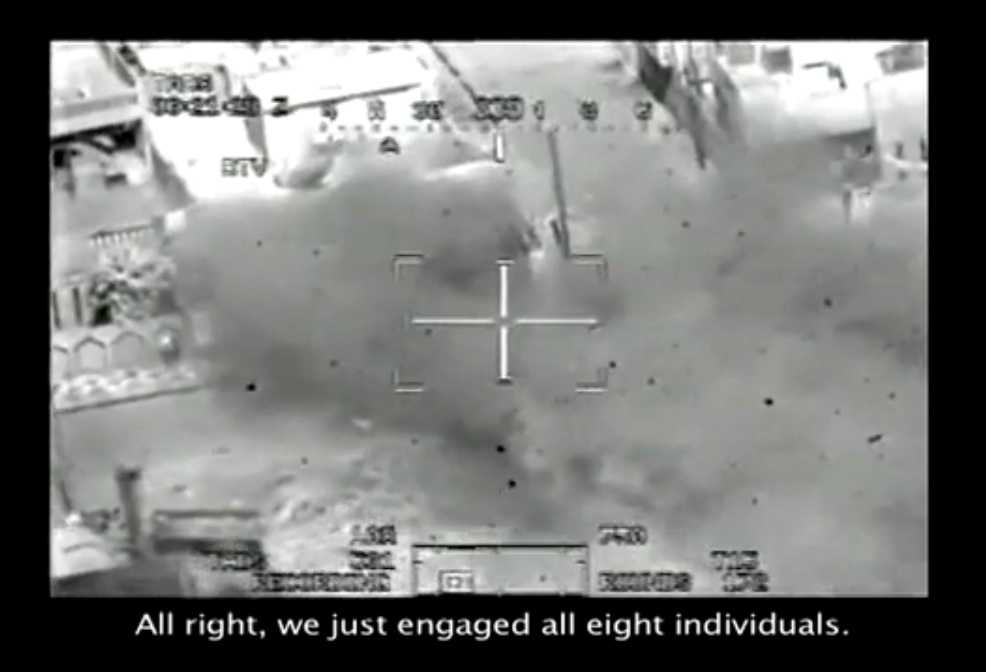 It’s important to note that the video’s opening frame is a quote by Orwell’s 1946 essay, “Politics and the English Language”:

[Political language is] designed to make lies sound truthful and murder respectable, and to give an appearance of solidity to pure wind.

Elsewhere in that essay Orwell writes, “political speech and writing are largely the defense of the indefensible.”  I think the assumed interpretation of this is meant to indicate the government’s defense to the public.  This language is then, of course, picked up by the body politic, replicated by supporters to other members of the public.  This language becomes the banal standard, the terms we use–whether we’re for, against, or indifferent–to communicate.

But I wonder if we might think about how we use smokescreen language like this on ourselves, to psychologically shield ourselves from what we know is “indefensible,” which could be translated here as “unconscionable.”

So when the soldier in this video says, “I’m just trying to find targets again,” we could say it’s because it’s what allows him “to do his job” (another phrase of justification, used to pass accountability to another realm).  Can you imagine it rephrased? 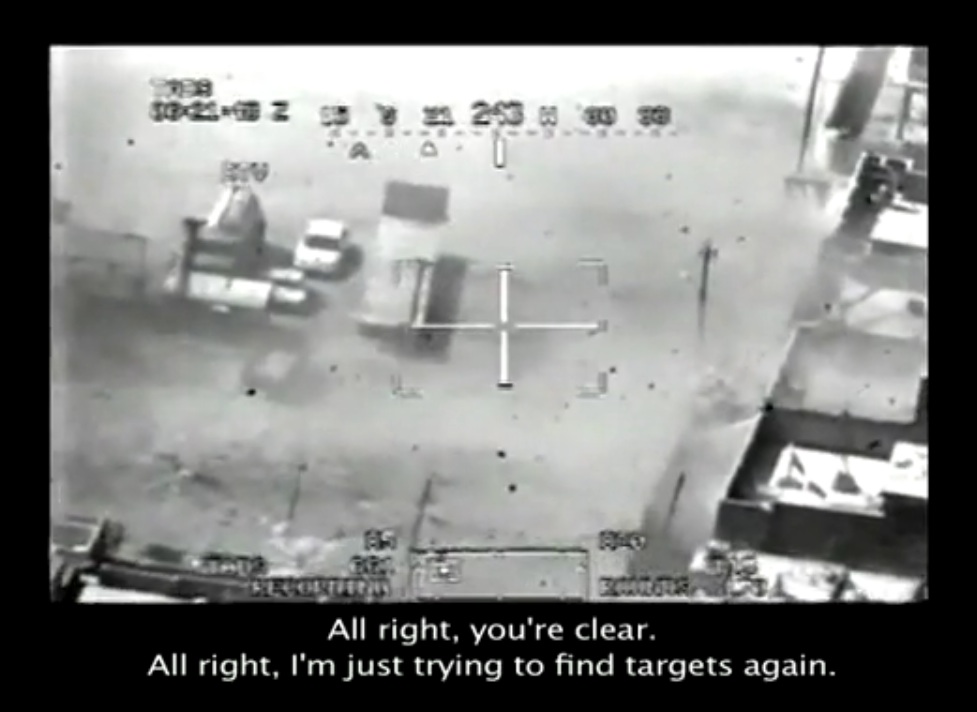 “I’m just trying to find a breathing body that has hopes and dreams like you and I to send a piece of metal through so that his blood will mix with the sand.”

This isn’t a piece about placing praise or blame on soldiers.  This isn’t the forum for such a critique; and having known several veterans of Iraq, I would never hastily condemn the individual without knowing more.  (For instance, what if the person doing the shooting ultimately found such an act reprehensible and leaked the video himself in a courageous attempt to right a wrong?)

This is a forum about language and its consequences.

Military speak is an extreme example of language that shields its users from discussing the indefensible.  It’s easy for us to assume that we are separate from those who must use linguistic mirrors to either do what they’re told or justify daily action.  But if you find this use of language chilling in its brutal efficacy, perhaps you’re willing to try something…

Let’s search for all those terms that displace our own accountability.  Let’s identify them, interrogate them, and reframe them for the better.  And let’s do it in a public forum.

Habitat loss and endangered species perform the same function that collateral damage and enhanced interrogation techniques do.  They are terms that permit–indeed facilitate–thinking that directs us away from a frame of accountability.

For those that think it’s a stretch to align environmental atrocity with the atrocity in the video below, you might first question how the two aggressions, rationale and even people behind those acts are similar.  The connections are staggering.

And so I’m calling on all rhetoricians, language-lovers, and wordsmiths to raise the stakes a bit, and using the emotion generated by the video below, to take ownership of language in such a way that it becomes infused with accountability and agency. 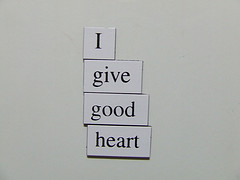 It’s April and that means poetry. Since 1996 April has been recognized as the National Poetry Month in the US. You see, here at Harlot, we believe that the production of frabjous rhetoric is just as important as the analysis of that rhetoric. So, that’s where the creative writing spectrum comes in and, right now, poetry. In honor of NPM, I would like to challenge y’all.

1. I’m going to challenge your conception of what and where poetry comes from by sharing this link from io9.com with you. The article, “Poet Encodes His Masterwork In Bacterial DNA,” explains one writer’s attempt to form a real, actually-makes-some-sense poem from nucleotides, and proteins, and other things I haven’t studied in years. Super-duper cool!

2. Harlot is about creating and being aware of our own rhetoric just a much as it’s an analysis of others’ rhetoric, and with that in mind, I challenge you to write me a poem. Write whatever you like–subject matter is not for me to decide–and address it to Kaitlin at harlot.osu@gmail.com. I’ll draw you a pretty picture or write a note back. This is just for fun and for me to read all y’all’s frabjous poetry skills, so I don’t want to hear any excuses about feelings of inadequacy and self-consciousness. This is an opportunity to practice, create, and exercise your own persuasive rhetoric. (Of course, the more unique the tactic of creation, the more creative response you’ll get. 🙂

Can you rise to the challenge?