Ben Stiller tries to explain Twitter to Mickey Rooney. I find Twitter to be a rather interesting creature. I’m kind of a Facebook gal myself, and even at that I only update my status about once a week, so Twitter has never been something that I got overly interested in.

I mean, I’m sure there are some people who post really interesting musings to themselves and all that, so I can see the purpose for it there. An extremely quick exchange of interesting ideas and all that. However, it’s the absolutely useless things that nobody cares about that are rather, well, annoying. For instance, is it really necessary to give a morning/evening/night greeting?

Anyway, I digress. So, Mickey Rooney is listening to Ben Stiller about this whole thing. And we all expect the traditional, “oh my, what is this new fangled invention response,” right? But, Mickey doesn’t fall for it. Oh no, he’s pretty calm and collected. This makes me happy, because I get a little tired of that stereotype. I’ve met as many young people as old who approach technology like it’ll give them a brand new rash and met some older folks who geek out on new gadgets.

Okay, yeah, so my grandmother still doesn’t know how to answer her cell phone, but she’s got one! And I bet Mickey does too!

There’s an article up at CNN.com called “The coming out stories of anonymous bloggers.” It’s a relatively quick, interesting read that I’m still trying to digest. It maps out some instances where anonymous bloggers were forced or found out and had to reveal their identities. In some cases, it resulted in a trip to the unemployment office.

I suppose I have mixed feelings about it. On the one hand, it seems that people commonly forget that they are writing in a public space and if you’re concerned with your public persona at all, then this should be a consideration. On the other hand, wouldn’t this constitute free speech? It seems a bit harsh for someone to lose their job (that had nothing to do with what they were posting about) when they genuinely tried not to have what they say reflect back onto where they work by obscuring their name.

Hmm, I’m still mulling it over. Thoughts, anyone? Now, this is sending a message.

via And I Am Not Lying

I’m becoming kind of fixatated on hair. It started with my students, and mostly the guys. There’s a trend towards funk. I don’t mean P. Funk style, though one can certainly see there some roots (puns are cool, you know it) in George Clinton’s glorious mane. 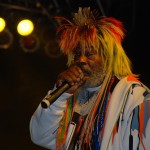 Okay, I’m not saying that this look is hot right now — but certain variations on the theme are. This makes me feel old to say, but college students do keep one somewhat attuned to the hip/ster look of the moment. And these days, I see a lot more variety in guys’ hair — one student has a Two-Face thing going on, another has a wild layered shag that requires constant handling; the faux hawk is still around, and frosted tips are coming back. And these aren’t even emo kids I’m talking about.

That’s what I find most interesting–the diversity of it all, and the way that no style seems clearly identifiable with any particular ideology. I dig it, in the same way I like watching this generation of college men, or at least some, being far more, well, liberated in their performance of gender.

Today’s NYT contains an article by David Colman about this very issue, noting both the historical use of hair as identification and the present play with those very notions:

Once upon a time — say, 40 years ago this week, when long-hairs thronged to Woodstock by the hundreds of thousands — you got a hairstyle to show the world your affiliation, to brandish a cultural identity defined by your musical tastes, your political views or how depressed you were. But such literal interpretations of hair appear to be utterly passé, even if the hairstyles themselves are not.

And check out this slideshow.

This really brings up the central rhetorical question of intention and reception — which one “counts” in terms of a text’s “meaning”? If I were to interpret my students’ ‘dos as representative of beliefs or values, I might be way off base. But then again, it’s quite likely I wouldn’t  be the only audience with such an interpretation, and that such readings would influence, well, “reality.” So what would the hair mean? As Colman concludes, “To turn an old ad slogan on its head: Not even his hairdresser knows for sure.”

For a skinny kid, I think a lot about food.  Not so much the tastes and textures, but the politics, value-systems, and rhetorics that surround its place in culture.  There is a developing food movement in this country; it’s comprised of many sub-movements based around the concepts and practices of “organic,” “sustainable agriculture,” and “slow food,” with “local” similarly occupying a prominent position.

We’ve not only seen the items on our supermarket shelves change over the past few years, we’ve witnessed the surrounding rhetoric shift in places and intensify in others.  With the introduction of genetically modified foods in the early 1990s, the expansion and entrenchment of industrial farming and monocrop culture, and the consolidation of powers that control the entire system, the message that accompanies food has increased in significance, adopting narratives of progress in some sectors, while remaining obstinately old-fashion in others.  For example, listen to Michael Pollan kick off the powerful documentary, FOOD, Inc., with a quick, but incisive rhetorical analysis on some of the persuasive techniques used to sell food:

(Perhaps y’all could chime in with some of your favorite rhetorical approaches and we can keep this conversation going . . .)

Of course, our movement is mirroring those elsewhere throughout the world.  It’s distinct, however, given our consumer-centric society and place in the hierarchy of consumption (we comprise about 5% of the world’s population and consume roughly 1/3 of its meat).  Food Sovereignty Movements are in nascent stages across Africa, Europe, and South America.  Soon enough we will also be in a position where one must declare (as ludicrous as it sounds) the right to grow food and have a say in where the rest comes from.

Currently, however, the word “organic” is the dominant term in our food conversations.  The term carries vast and various associations and values that go far beyond a simple label indicating how the food was raised.  Here’s some fodder for you rhetoric junkies: The Daily Show’s look at the White House’s organic garden reveals a struggle over which values will get associated with organic.  Enjoy watching while I go hunt down some articles on the rhetoric of “organic” for a future blog post . . .

Here’s another site if you’re looking for incidental music for your multimedia Harlot compositions. I’ve already brought up Musopen and Funky Remixes, which are at different ends of the spectrum, I’d say, but the Free Music Archive contains a much broader sampling of genres. Of course, not everything on there is what I would label quality, but they seemed to have a great selection of classical, old time/historical, and electronica, while other genres are merely solid. It’s still worth an earful gander, though.

Oh, and the site labels every individual track with the particular copyright. Everything on there is either creative commons licensed or in the public domain and available for download. Lucky you, huh?

I’ll even give you something to start you off with. Hmm, let’s go with a little middle-eastern psych rock (love that combination, by the way): Hayvanlar Ami’s “Gökte Güller Açryor,” which has a creative commons Attribution Non-Commercial Share-Alike license.