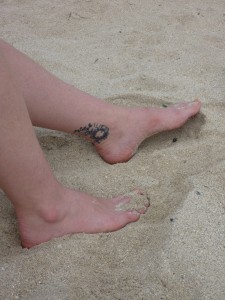 design by my friend James Thornburg!

I have a Harlot tattoo. Yup. That fancy O from the logo? It’s on the inside of my left ankle. It is, nearly needless to say, awesome. I got it the day before my dissertation defense; it offered a great physical distraction from mental strain. It also felt good to literally mark the end of that era, the final, long-time-coming accomplishment of the degree — and it made sense to mark it with Harlot. The visibility of the tattoo, its placement where people would see it all the time, was something I struggled with. Not just because my mother hates it, but because it felt like a rather public statement.

I went to a cool talk at a conference recently, and one of the presenters–the delightful folklorist Martha Sims–was talking about the rhetoric of tattoos, particularly verbal ones. The most interesting part, for me, was that several of the people she’d interviewed said that they don’t think about their tattoos as having an audience other than themselves. Their choices are meaningful and in some cases private; the fact that many people will see and interpret these texts was not a significant contributor. So this got me thinking about my own.

I have another tattoo, one I got in my 20s, that has personal significance but is otherwise, as first tattoos will be, a bit silly. Thankfully, that one is on my lower back — which means it gets mocking names like “tramp stamp,” but it’s also conveniently out of sight almost all the time. (Thank god I aged out of those super-low-rise jeans.) So that’s like my personal tat, whereas the Harlot one is my public tat.

I’m not sure what it communicates, of course. For most viewers, it would just be some fancy black design, without significance itself — but significant in its presence alone. I am a person with a visible tattoo. Different audiences will see this differently: I might be the cool professor or the trying-too-hard-to-be-cool professor or the edgy junior faculty or the trite gen-x-er… or, as in reality, some combination of all. I like that people don’t know what it is, because they’re less likely to have an immediate response to the content (and I might get to tell them about Harlot). But inevitably, it will be read, as will my body and therefore me. This, I realize, is not particularly novel: our bodies are read as texts all day long, whether based on elements under our control or not…

Perhaps that’s what a tattoo communicates: that we’ve chosen to textualize our bodies, to have a say in what they say. Even if what they say is incomprehensible…? Even when we’re/they’re only talking to ourselves…? Even when others overhear and understand — or not?

I should do some research on this, but we have an issue to put out. So… what do you guys think?