Speaking of rhetoric in everyday life, I love a smart and savvy Craigslist ad: 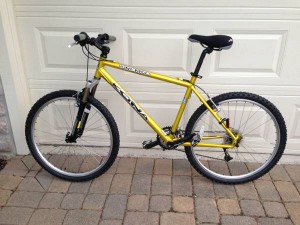 Grab a paper bag, breathe into it and calm your ass down. You’re hyperventilating because you ain’t never seen a deal like this before. Now collect yourself, then keep reading this incredible description that barely serves to do justice to my 2003, 19″, KONA Muni Mula, 7005 Double-butted Aluminum, multi-gear mountain bike. Also known as the greatest bike the suburbs have ever had the privilege of existing around.
What makes this bike so much better than every other bike that has ever been pedaled? Glad you asked. It starts with the paint scheme. It looks like 24 Karat gold if they made bikes out of 24 karat gold. That’s bold, son. Curb appeal.
What else? Ryan, the paint’s a little dinged up. Yeah, well, that’s called real life. It comes at you fast, bro. Besides, you really want this glimmering, shimmering sex machine catching the eye of some small time thief? You really don’t want to be living your own version of PeeWee’s big adventure. Consider the lived-in feel a natural crime deterrent. If this bike were denim jeans, it’d be called “de-stressed” and you’d be paying extra for the privilege. I’m not gonna charge you extra for it, though. Cause I’m not trying to take advantage of you. But you should take advantage of this once-in-a-lifetime opportunity.
What else? Let’s talk about that Marzoochi Bomber front fork for a second. It’s as gnarly as it is exotic. Like the tropical, saw-toothed platypus. Which is a species that does’t even exist. Fortunately this crazy front fork does. It offers bomb-a$$ shock absorption, as the name implies.
What else? Did you see those Shimano Deore Rapid-Fire Shifters? These shifters make you wanna take this thing off road in a big way. They also offers a terrific chance to introduce that dome of yours to a tree. So don’t trip. Ride safe. Get a helmet and if you’ve never ridden a bada$$ mountain bike, maybe it’s time to move along, young sir because this thing is made for big hills and mud trails. What this bike does offer is a one-way ticket to legits-ville. Find a bowling ball. Then find another one. Your nuts must be at least that big to even consider making this whip the dreamiest object to ever take up space in your garage. But you’ll be filled with joy once you throw a leg over this flawless piece of cycling excellence.
But, Ryan, aren’t you sad about selling the greatest bike on earth? No. When you ride this bike once it permanently eliminates your ability to feel sad about anything ever again. Even for little puppies who are afraid to walk down the stairs, because the stairs…they’re so big, and they’re so little. Puppies who are young, but have already discovered the world to be a cold, unforgiving place. But you won’t give a shit about it because you’ll be on your awesome new bike living the dream.
And you’ve just learned something else about me. That’s right, my name is Ryan. And your name is lucky motherfather if you make the best choice of your life and pay me cold, hard cash for this ridiculous ride.
2003, 19″, KONA Muni Mula, 7005 Double-butted Aluminum, multi-gear, hard-tail mountain bike with Marzoochi Bombers, Deore Shimano Rapid Fire Shifters. Barely Ridden, like new.
In no rush to sell, big ballers only, no low-ballers. $650 OBO
Contact Chris near Alum Creek Trails

In terms of rhetorical strategies, I love how this is simultaneously a spoof on typical advertisements and a genuinely persuasive advertisement at the same time. It has that sense of humor which builds rapport between the seller and the audience as well as talks up the bike in that “and that’s not all” infomercial genre. Very clever.

This might come off as more of a gripe than anything else, but I believe it needs to be said, so advertisers out there, listen up. Making television commercials louder than the program’s volume level is not a good strategy. Yes, my attention is temporarily drawn to said commercial, sure, but only long enough for me to hit mute. So, while Mr. or Ms. Advertiser thinks that we’re going to be paying so much more attention to their ad because the volume is louder, what ends up happening is that we (yes, I’m including you all in this too) mute the commercial or semi-frantically hit the volume down button ten thousand times–blocking out its attempts to ensnare us with its attempts at persuasion. Advertisers not only fail their primary task (to get me to watch their advertisement), but they tick off their audience at the same time. Again, not a good strategy.

It seems Heineken has started to market to public intellectuals as well.

“He who wanders with purpose has no purpose to wander.” Grr.

. . . But this came in the mailbox. And in the form of a credit card offer.

I get pre-approved for all kinds of cards, so I see all kinds of offers and techniques to try and get me to use their card. I was rather impressed by American Express’s latest maneuver though.

Travel. Note the “plane ticket,” the “passport.” They really went for it with these materials. 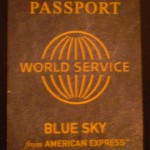 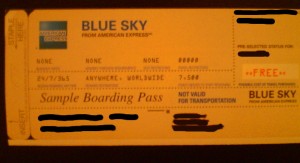 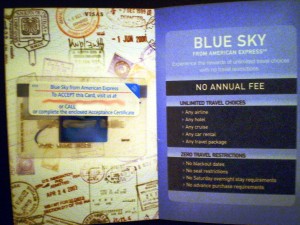 Being a so-called youthful and exuberant person, travel is quite the enticing proposition. So, they’ve got my number. Well played American Express, you correctly identified my demographic. If I actually needed a credit card right now, you might have beat out the competition. Fortunately, I don’t. But I still appreciate the effort. And I actually do find this quite a persuasive piece of advertising.

Last week, Microsoft unveiled its first television commercial in its new $300 million campaign to “highlight how Windows has become an indispensable part of the lives of a billion people around the globe” (Microsoft press release). I’ve been amused by the Mac vs PC ads that have been around for a bit, and Windows has been working to counter them with a this new advertising scheme that features the comedian, Jerry Seinfeld.

Some of the responses I read, including a blog post by David Zeiler of The Baltimore Sun, give responses that I think are just a bit too negative (but some of the comments on Zeiler’s post expand the conversation in really smart ways). Is this the first ad that sells a product without showing the product? Certainly not. It’s risky, but sometimes it works. (For one of my favorites, take a look at what Haagen Dazs is doing these days.) I think in this case the ad is more powerful than some are giving it credit.

Just recently, a member of a listserv to which I subscribe posted a link to a very interesting episode from Frontline called “The Persuaders.” I watched only the first chapter (which was really good, and I’m looking forward to the rest of it), and what it presented resonates with the Apple and Windows ad campaigns: When our culture is already imbued with advertising, creating a flavor that pops out from the rest is difficult but is what every ad agency tries to do, and as those agencies continue to compete, they increasingly blur the (already unclear) distinction between culture and advertising. That’s precisely what Microsoft is doing with this first commercial and apparently what it will do with its entire campaign.

So far, however, I’m more a fan of the Mac vs PC ad campaign. The commercials do well in their simplicity, comedy, and visual representation of the two operating systems/software/hardware bundles (I’m not quite sure how to describe them when “Apple” refers to all three components and “Microsoft” refers to the first two). The Mac guy is confident but not pompous, competitive but sensitive, and very human and fun. The PC guy is the nerd with glasses who could use some exercise, needs to get out of the office, and should work on catching up with the times. Would I take such a simplistic approach in identifying people in real life? No. But I do think it works here.

But I’ll let you decide.

Garr Reynolds over at Presentation Zen has a good breakdown of the visual elements of IKEA. I highly recommend that you read his post “Learning slide design from an IKEA billboard.” He provides an excellent analysis of what makes the posters persuasive and engaging. It really is a top notch post.